This summer we went to Altai Mountains again. I can never get bored of Altai, it's a fascinating, fantastic, wonderful region with so many attractions, that one can spend a life and don't see them all.

I was dreaming about visiting Multa Lakes for many years. The lakes are located in Ust-Koksa district of Altai Republic. This district is a near-border area, and one has to obtain a permit to enter it. This is not difficult at all, and takes only about an hour, but if you are a non-Russian citizen, you have to apply for the permit in about two months.

I didn't manage to visit the lakes in my youth, and it's still difficult for me, as my kids are not big enough to go on a many-days hiking tour. But fortunately, one doesn't have to make a long hiking tour to get there, it's possible to drive there, though not by every car. Not even all off-road cars can get there. The most typical vehicle delivering lazy tourists is of this kind: 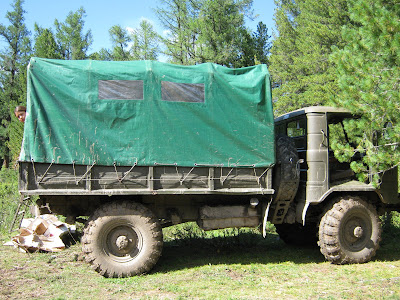 There is as good as no road there. Well, when doesn't rain for several days (and this region is one of the rainiest areas in Altai), the 'road' looks like that: 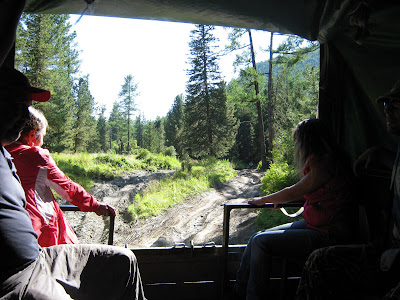 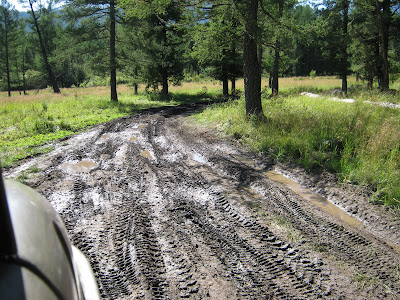 At least the driver said the road was OK the day we were there:)
I can believe him, he brings tourists forth and back every day almost all year round.

This kind of road begins in the village Maralnik, the closest settlement to the lakes. This village itself is quite accessible by any car. In Maralnik there are two campings, and several more are situated in the villages Multa und Samulta, which are a little farther from the lakes, but these villages are bigger than Maralnik, with more shops and other opportunities.
Vehicles to the lakes usually departure at 9 or 10 am and come back at about 6 or 7 pm.
But a hiking tour is, of course, more exciting, and if you are in a good shape, it's much better to walk. The vertical drop between Maralnik and the lower Multa lake is only about 400 m, so the walk is quite an easy one. The walking distance is about 10 km, while the drive is about 15 km.
Day temperatures in this region in summer are quite high, up to 30 degrees, and the sun is very strong. The night temperatures, meanwhile, can be as low as 0 C degrees even in summer.

There are tree Multa lakes in general. River Multa flows out of the biggest lake, called Lower Multa lake. The Upper Multa lake is situated in Katun Nature Reserve, and one has to obtain a special permit to visit its territory. But the distance between the Middle to the Upper lakes is 11 km, so we had no intention to go there, it's not so easy with small kids (and ours are 4 and 6 now).
The Middle and the Lower lakes are joined by a waterfall-like river called Shumy (Noise). The Middle lake lies somewhat 50-100 m higher than the Lower one.
Tourists (like we are, who are delivered to the lakes by vehicles) are brought to the Lower lake at about midday and have about 4 hours to walk to the Middle lake and back. The distance is 6 km on the whole, and the path is good almost everywhere, except for a couple of spots where it is covered with huge stones, and it's not especially good if it has been raining for some time. As mentioned before, rains are rather frequent in this area.
But we were lucky enough to be there on a warm and sunny day, though it was very windy near the Middle lake. The southern part of the Lower lake where the vehicles wait for tourists, on the contrary, was sunny and hot. Though the water is about 10-16 degrees, many people try bathing in the lake.
And, like nearly everywhere in remote places of Altai, it's very clean and clear. 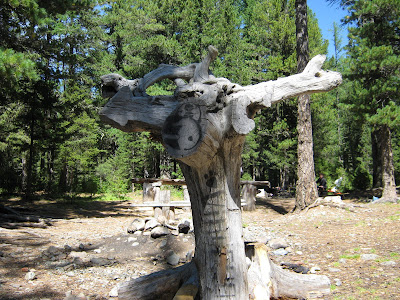 Wу are certainly planning to visit the lakes again, and it will be a hiking tour, of course.