Hello, everybody reading my blog.
I'm finally up to writing the last part of the story about our Chuya Road travel.
And it is just the right time to finish the story as spring is already here and I'm packing my backpack for the next tour, not knowing yet where we'll go.

I finished the last part of my story at our arrival at Ulagan District of Altai Republic. The district is loved by car travelers as many of its attractions are located along the road or quite close to it, except for Uchar waterfall, which needs about 10 km hiking to be seen. We haven't been there yet, it would be a too difficult journey for our kids, but we are definitely going to go there in a couple of years.

To get to Ulagan district one needs to leave the Chuya Road in the village of Aktash and to turn to the road leading to the settlement of Ulagan, which is a district center. The road to the settlement has asphalt surface only partially and is sometimes not especially good, but if you want to reach really beautiful and remote places, you should be aware that all other roads will be much worse. Some of them are suitable for off-road cars only, and even they suffer a lot there.

But we were not going that в far, our destination in Ulagan District was Katu-Yaryk Mountain pass. I was longing to see it since I had seen the pictures of it made by people who'd visited it before. They said it was something unbelievable and that the photos cannot render the real picture. How very right they were!

We headed for Katu-Yaryk the next day after our arrival to the camping at Ulagan mountain pass. It was a gray day in the morning, but the weather in the mountains changes several times a day and we thought we still should try to do it.
And it was not a mistake, in an hour only the clouds went away, the sky was blue, but fortunately it was not as hot as the day before.

We passed the settlement of Ulagan having noticed that  it was not as busy and civilized as Kosh-Agach we'd visited the previous day. We found no cafe or canteen there, but perhaps there is one somewhere. But there is a bank and an ATM, several food shops and the museum of Pazyryk culture (http://en.wikipedia.org/wiki/Pazyryk_culture)
I wanted to visit it but we decided to do it on the way back. I was wrong, of course, it was closed on our way back. Well, it's one more good reason to go there again.

The road was quite good up to Ulagan, but right after it it was only an earth road, and after a small village of Balyktuyul it was a simple forest road, which can hardly be called a road. But the weather was dry those days and we were lucky to get to our destination fast enough without getting too tired. 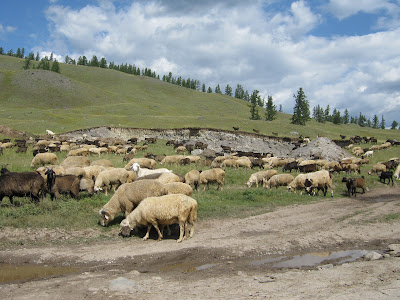 Katu-Yaryk is really almost impossible to describe in words. Imagine a great canyon with Chulyshman river flowing down and an earth road made right on the steep. There is no chance of surviving if one fell of it.
It's terrifying even to be on top of the pass, and I can't imagine the way I would feel if I had to drive down the road. 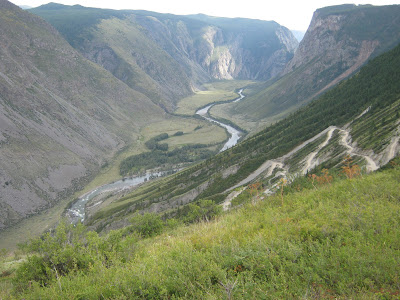 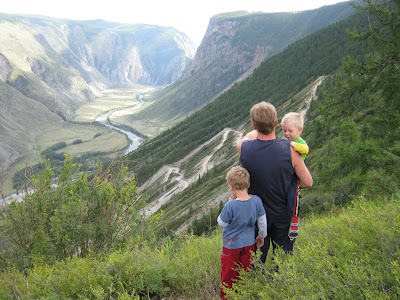 We didn't allow the children to run over the place, drove a little bit from the steep and had a picnic there. The place is charming with hardly any people except for travelers coming up and down the pass and a couple of locals on horses who don't bother travelers.

On the way back we made a stop on top of Ulagan mountain pass. It was quite a different place, but as charming and serene as everything in Altai, located far from big settlements and crowds of people.
It was extremely windy there, this pass is about 2100 m over the sea level. The mountains there are covered with cedar forests and my husband wanted to find some cedar nuts, but he failed. The locals told us later that year was not a fruitful one. 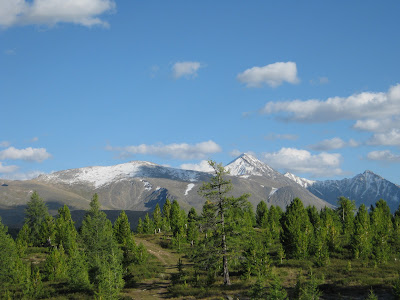 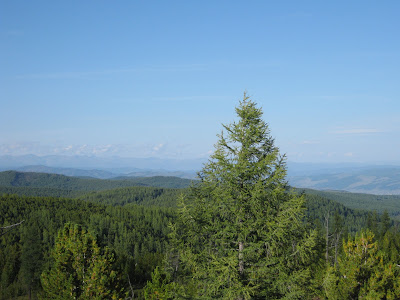 After such a wonderful but stressful day we made a little fire in the camp. The lakes near the camping are full of fish. We are not fishermen ourselves, but a local sold us 4 ice fishes which turned out to be delicious.

It was a pity to have to leave that place, but we had some more plans.
So we left the next day about lunchtime and drove about 300 km that day. We actually wanted to make a stop somewhere close to Seminsky mountain pass but didn't find any camping which would suite us. So we came to the camping called the Baths of Katun. The baths are some kind of lakes, formed by the Katun river, which dries up by the end of summer and some parts of its riverbed turn into small lakes. Water gets warm there under the hot Altai sun. We didn't have any doubts about making a stop there. It was really nice to swim and bathe after the trip. We spent three luxurious days there swimming, sunbathing, making small trips nearby and relaxing. The camping is really good, though very crowded. The place is popular as it is one of the few places in Altai where it's possible to bathe and it's close to the main attractions and it's not far from the cities of Biysk and Gorno-Altaisk as well. Many people come there only for a day. The camping is taken care of, cleaned everyday, but it's more expensive than many other campings. 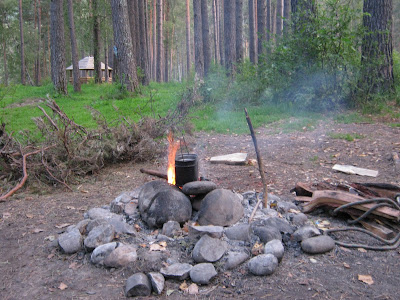 We thought we'd spend as much time in that camping as the weather would remain sunny and hot. The morning of August 23 was rainy and gray and we decided not to stay longer. Besides, we'd eaten all the food we'd taken and bought. It is not a problem to buy food in Altai Republic, of course.
We were just tired of relaxation, perhaps, so we were happy to be driving home and to be dreaming of our next travel there.
The next Altai travel was not late in coming...
Автор: Olga Tkachenko на 13:49