I started dreaming of the next Altai travel as soon as came back from there in the end of August. Altai is able to capture you, perhaps the same way as all mountains do.
November 4-7 is a public holiday in Russia and everyone can enjoy some days-off. Unfortunately the weather is usually dull-gray within this period. It's late autumn, no leaves on trees, sometimes it snows, sometimes it just freezes, but sometimes we are lucky to have relatively warm and sunny weather.


November 2010 was exactly of the latter type. Warm, about +5-+10, sunny from time to time. Untypical for the region, but we decided not to miss the chance and hit the road again. This time we thought it would be unwise to make a long trip into remote regions, as it could be snowing there, but decided to visit Lake Aya, which we never visited in summer as it's crowded with holiday-makers. This is one of the few places in Altai where it's possible to swim and it's the closest point to the cities. It's only about 450 km away from Novosibirsk and slightly more than 100 km from Biysk.
The region around the lake is not really mountains. It's just the very beginning of the range, with slopes about 200-400 m high. The Katun river is not as powerful there as it is in the distant regions we had visited in summer.
And it's the most expensive region in Altai, too. There are numerous rest houses, hotels, cafes with prices quite comparable with those at the resorts somewhere in the Alps. In summer many families with small children come there, young people wishing to visit discos in the open air and other people who prefer comfortable vacation but wish to see something of the mountains and the nature as well.
We thought that late autumn should be the right time to explore the region, there should not be many people and the prices should be relatively low.
We were right as to the first point and completely wrong as to the second. It WAS very expensive.
We rented a wooden summer house with heating system and it cost us 1200 rubles (40 USD) a day for the whole family. To compare: a similar house in August cost us 700 rubles (app. 22 USD) for our family, but is was in another place.
The prices in cafes and restaurants were high, too, but it was somewhat cold to cook on our own, as we had to do it in the open air.
But those three days were great, though.
Lake Aya is a small one, but it looks pretty with no people bathing in it. I don't think I would have found it so pretty in summer with thousands of people trying to swim there. 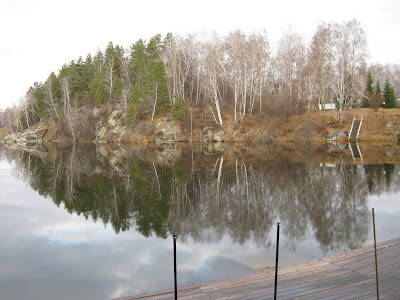 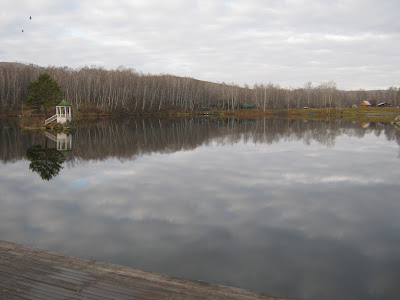 The hills nearby are low, but it makes them quite suitable for easy hiking with children or for elderly or unprepared people. Moreover, it's possible to drive on top of the hill by an off-road car, and almost as high as the top by an ordinary car. We decided not to do that and did some hiking instead. It was great! Not hot, so that one didn't have to sweat, but wasn't very thirsty as well. And a view was wonderful, too, though it's not possible to see snow caps in that region. 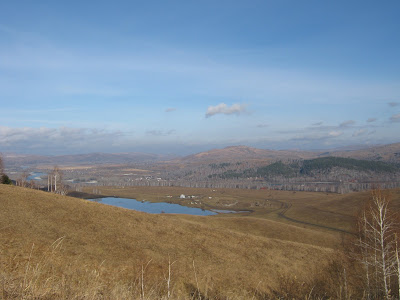 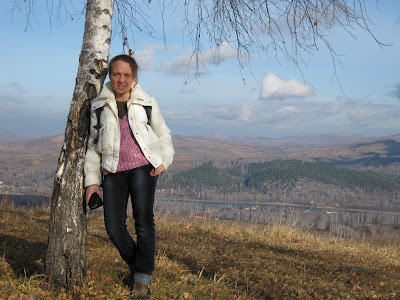 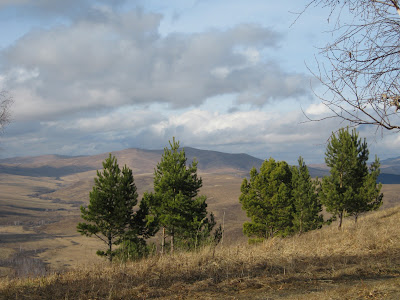 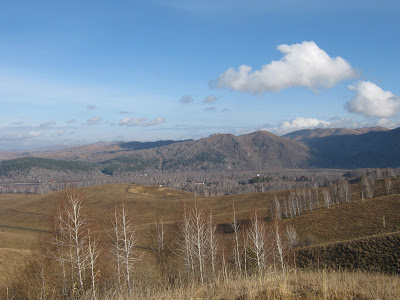 There is a new ski resort built in that region, and the hills are quite good for the beginners there.

The next day was even sunnier than the previous one and we drove a little further. We wanted to see the so-called Blue Lakes at the Katun river. If you've read my previous post, there was something about the Katun Baths. The Blue Lakes is something similar, but they appear even later than the baths, in late autumn, but water in them is quite warm even in winter (about +8) so some people bathe under the bright sun.

The well-known road to Chemal District was empty, but as beautiful as in summer. 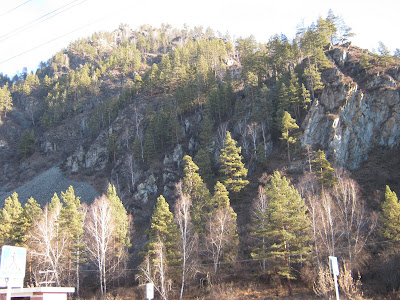 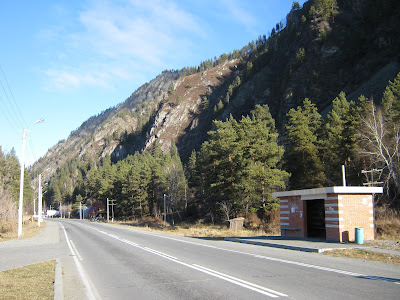 We had espresso in a motel, 100 rubles a cup (about 3.3 USD). It's expensive even for Novosibirsk, but to our surprise the most cafes were closed. Autumn and winter is a low season and those cafes and hotels which do open, keep the prices at a very high level.

The Katun river looks fabulous in November. It's turquoise at that time. In summer it's milk-white or greyish. It was so wonderful that I was just standing and looking at the clear water for a very long time. But there is little of Katun left in autumn, it dries up, almost completely in some places. 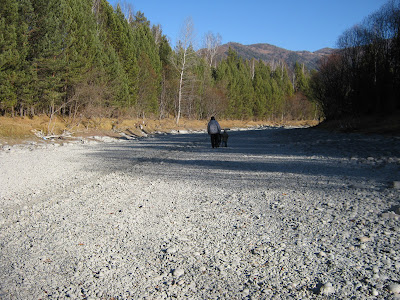 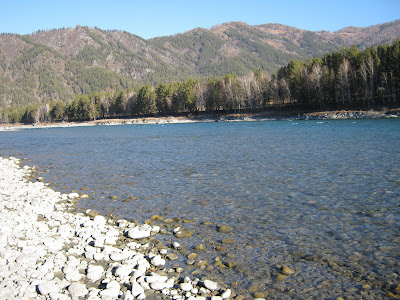 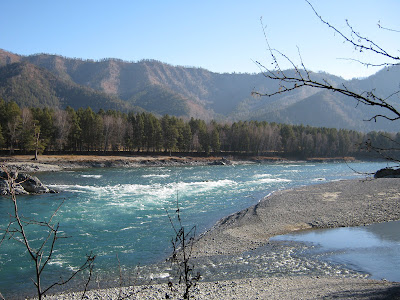 We didn't reach the Blue Lakes that day. My sons were tired and hungry after the walk, and I had forgotten how long it was to the lakes from the village of Askat where we had left our car. The guidebook says it's 4 km, but I thought we had made a longer way. Anyway the walk was great. It was about 0 degrees C in the shade and about +10 in the sun. The air was so clear that it almost rang and sang.

The village of Askat is a beautiful and sacred place. It's a small village, but it's inhabited with Buddhism followers, artists of different types, craftsmen, musicians. It's quite famous among those who want to find their spiritual way of life. It's quiet and peaceful. http://www.buddhism.ru/eng/we/askat.php
http://askat.buddhism.ru/eng/
If you are interested in Buddhism, but want to experience Russian Altai, it's the right place for you. 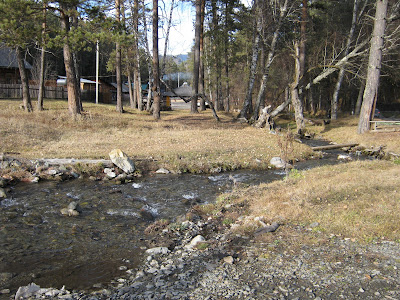 There is a studio belonging to a family of craftsmen offering really unique works of art. They manufacture them on their own and sell right in their house or in the open air when it's warm. http://www.vgorah.narod.ru/HTMLs/FotoGA/askat-etno.htm (This website belongs to the man who has traveled in Altai a lot and was in such remote and secret places not many had a chance to see. The website is in Russian only, but the pictures don't need any comments).

It was a pity to leave Altai so soon, but we had to.
Still the travel was wonderful and it charged us with energy for the whole winter.