Trying to describe Novosibirsk it would be strange not to write anything about the Ob River.The river is much spoken of, and if widely famous among those who lives in Siberia or has ever come here.
This river is one of the great Russian Rivers, which are known to practically all people of the world who have studied geography at school.
Here's what Wiki says about the river: The Ob forms 16 miles (26 km) southwest of Biysk in Altai Krai at the confluence of the Biya and Katun rivers. Both these streams have their origin in the Altay Mountains, the Biya issuing from Lake Teletskoye, the Katun, 700 kilometres (430 mi) long, bursting out of a glacier on Mount Byelukha. The Ob zigzags west and north until it reaches 55° N, where it curves round to the northwest, and again north, wheeling finally eastwards into the Gulf of Ob, a 600-mile (970 km)-long bay of the Kara Sea, which adjoins the Arctic Ocean.
Read more here: http://en.wikipedia.org/wiki/Ob_River

http://www.britannica.com/EBchecked/topic/423582/Ob-River
It's a shame for me to say that I've seen only the beginning of the river in Altai Mountains, and what the river looks like in Novosibirsk and about 30 km to the north, but I've never seen it closer to the Arctic Ocean.

When you look at rivers Biya and Katun in Altai mountsins at their very beginnings, you can never imagine that those typically mountain streams turn into a great flow.
The Biya flows out of Teletskoye Lake. It is furious in early spring and almost a valley river in late summer and in autumn.
Katun is of a different kind. Taking its beginning by Belukha mountain, Katun together with its tributary Chuya remains an attractive thing for rafters from all over the world. It makes more bends than Biya and it has more rifts. Its color is white-grey in spring and summer and close to emerald in autumn. 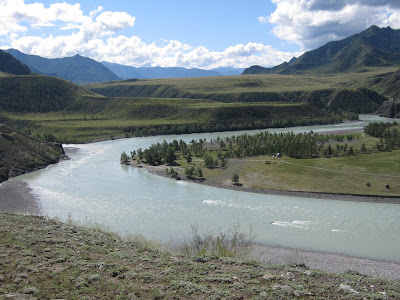 Both rivers join together about 30 km to the north of the town of Biysk and form the Ob. It's navigable from that place on. In Altai it's only possible to move along by rafts and motor-rafts. A rafting tour in Altai will be a unique and extraordinary experience.

In Novosibirsk the Ob is about 600-700 m wide depending on the season. It is shallow in late autumn and deep and powerful in spring. Real floods are rare, but if we happen to have a snow-rich winter in Altai and in our region, some places and datchas (summer houses with vegetable gardens) may be flooded. This happened in summer 2010 when the gardens which lie low were full of water and people had no chance to plant something there.

Several bridges cross the river in Novosibirsk. currently there are two traffic bridges, two railway bridges and one metro bridge. The third traffic bridge is about to be open.
Numerous beaches along the banks make the place attractive in summer. Though many people don't think the water is clean enough for bathing, others still do it. 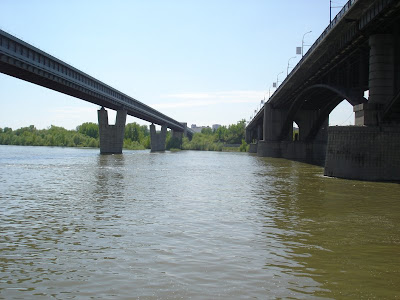 In the middle of the 50-s it was decided to create a reservoir and a hydroelectric power station in Novosibirsk. Several villages were destroyed to do this, but now we have a place which we call the Ob Sea. For us who live far from any natural sea this place is a nice one, with numerous beaches, summer resorts and campings all along it. 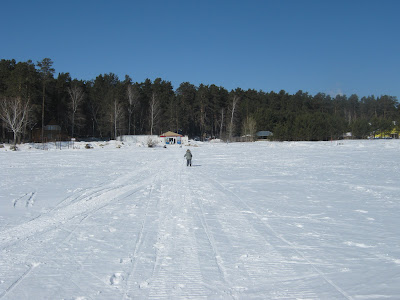 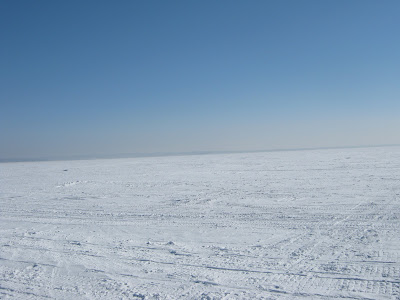 The same as the river, the reservoir is frozen in winter, and it's quite attractive for cross-country skiing with its even surface and pure snow.

The river remains frozen until somewhat middle March, unlike the reservoir which remains under ice until as late as middle April. Both places are popular among fishermen.
I will add information and photos later on, as there is definitely much more to tell about the Ob.

Email ThisBlogThis!Share to TwitterShare to FacebookShare to Pinterest
Ярлыки: Siberia