Golden autumn is still with us, and the weather is so wonderful that one just cannot stay at home. My passion for travels captivated me again and the last weekend my husband, my sons and me were out most of the time exploring the surroundings of our city and enjoying the sun, the golden scenery and ourselves.
On Saturday, September 16, we were sunbathing and even swimming on one of the beaches of the town Berdsk, which is only 4 km away from Novosibirsk. The river Berd flows into the Ob there forming quite a big gulf.


Swimming on September 17 in Novosibirsk is something extraordinary, but it was about 25 C in the sun and the water felt about 13 C, which is OK for a little water fun. 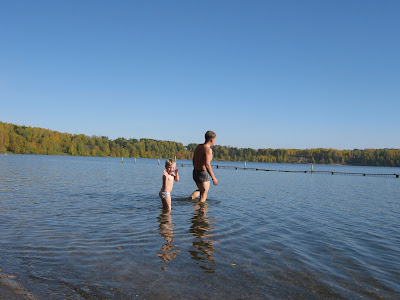 And on Sunday we drove to one of the most beautiful places in the whole Novosibirsk Region, the Rocks on the Berd (known as Berdskiye Skaly and Zveroboy among the locals). This place is situated in Maslyaninsky District of the Novosibirsk Region, which is sometimes called Siberian Switzerland. In this district the Salair Range is situated, which is not high (the highest peak is about 450 m only), but its beauty is no less than that of the Altai. In this place several ski resorts were built, making it extremely popular among the local population and many come even from other regions.
In summer and autumn the place looks fantastic!

This weekend was the second time this year we were on the Rocks on the Berd. The first one was in July, when everything around was green and looked like an ocean of all shades of green. It was strikingly beautiful when I first saw it. 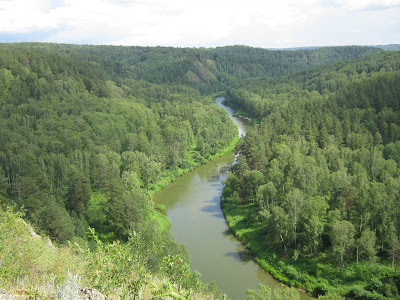 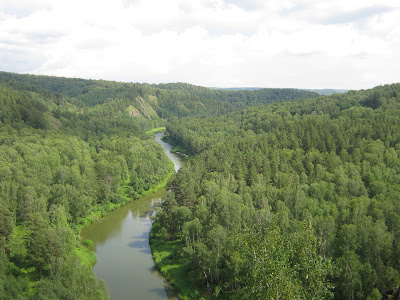 That time we didn't manage to go down to the river, though I found a path leading there. But I firmly decided to come here again, and preferably in the autumn when everything would be red and yellow.
And I did it yesterday.
Unlike the previous time when we left our car in the village Novososedovo and did a 2 km hike to the rocks, this time we drove directly to the edge. A hike is of course better, but my sons still feel tired after our summer adventures (which I'll describe later, until now I've only written about the Multa lakes), and we agreed not to force them to hike. Still, we managed to walk down to the river and then climb back, thus satisfying our desire to have some physical activity.
The scenery looked even more striking than in summer with all this gold, crimson, orange, yellow and green colors around. No wonder there were much more people there yesterday than in July.
No camera can ever catch all the shades of nature, and we all know it. My impression was that of looking at a patchwork carpet. 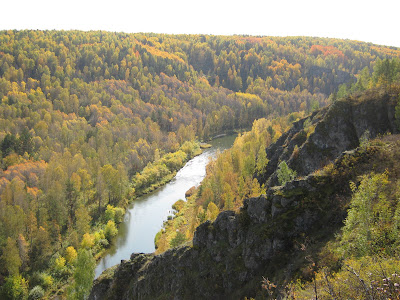 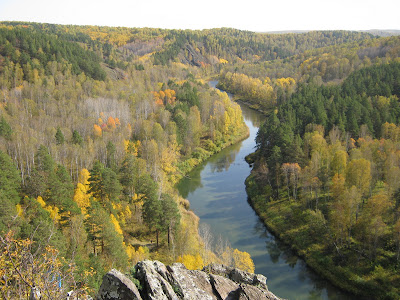 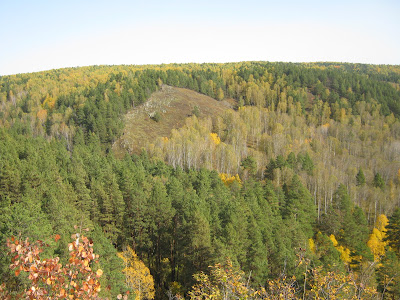 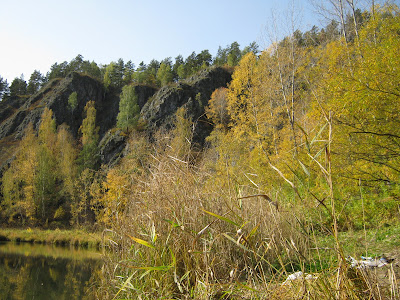 The river Berd is a quiet and slow one, but when I was looking from different places on top, I saw something like rifts in both directions. They are very small, of coirse, but I suppose there can be bigger rifts upstream. Both in July and yesterday we saw several groups of rafters, so I suppose it can be interesting. And it is definitely suitable for children, which is very good for me. In Altai we are unable to take kids with us on a rafting tour, which is something I like, as the rivers there are strong and children until about 12 or 14 are not allowed. 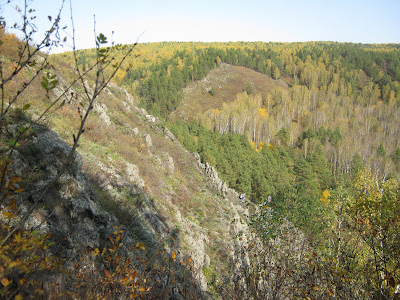 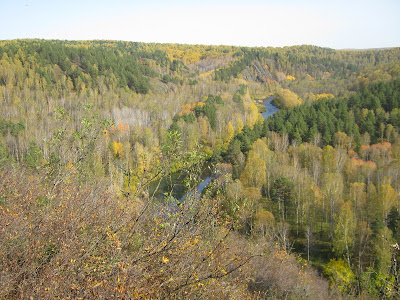 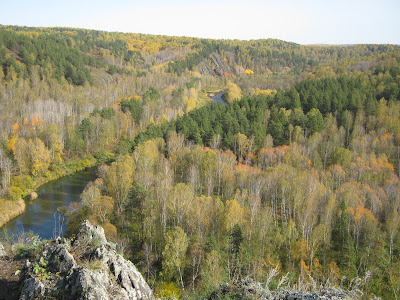 I hiked a little and took pictures from different perspectives.
Loads of people were having picnics there. There are also places for tents both beside the river and on top of the rocks, so it might be a good idea too.
It's only a pity that we can't visit this place more often. Though it is in Novosibirsk Region, it is 160 km away from the city, and the last 60-70 km one has to drive along earth road, so one should be prepared to get covered in road dust. There are two ways to get there from Novosibirsk.
The first is to drive through Academgorodok, then reach Berdsk, then Iskitim and turn the direction of the settlement Legostayevo, and then the direction of the village Novososedovo.
The second is to drive out of Novosibirsk along Gusinobrodskoye Highway and drive through the village Plotnikovo until the turn to the village Vladimirovka, then drive straight ahead until Legostayevo and then the same as above. In both cases one needs about 2 hours to get there from Novosibirsk.
Автор: Olga Tkachenko на 11:39