I was thinking about visiting Shinok waterfalls for a long time, but I read that it is not so easy to reach the waterfalls, as the path was not a simple one and it could be difficult with kids. Many stories about a hike there were written by travelers with kids and I thought it would be reasonable to wait a little for my sons to be older. But this summer  I thought we could at least try to do it, and after a hike to Multa lakes I got rid of my fears, so we did it!


Shinok waterfalls are situated in Altai Mountains,  not in Altai Republic but in in Altaiski Krai, Soloneshensky District. This place is less known than many other destinations, which is a big advantage for us (I've written that my husband and I do not like crowds). Another famous attraction quite close to the waterfalls is Denisova Cave (http://en.wikipedia.org/wiki/Denisova_Cave, http://archaeology.about.com/od/dathroughdeterms/qt/denisova_cave.htm), which is of great interest for archaeologists, historians and paleontologists. We visited the cave, too, and it was a great experience, but for the kids who are still too small to be fascinated by ancient findings, it was quite boring, so we didn't stay there long.

When we arrived to the place, it was not easy to find a camping there. We found a big place looking like a camping and a guest house, but it was closed. Then we saw a camping for archaeologists, but they do not want any non-professionals there.
They told us to drive 5 km more and there we found a nice and cheap camping called NeoPlant. Moreover, it was the place where the off-road cars to the waterfalls depart.

A night costs 150 rubles per 1 own tent irrespective of the number of people in the tent, a night in a rented tent costs somewhat 200 rubles per person and a night in a house (toilet outside) costs somewhat 500 rubles per person. There is no shower there, only a banya, which is very cheap (300 rubles an hour irrespective of the number of people). There are equipped fireplaces and one can rent a grill for shashlyk.
The host told us the off-road car to the waterfalls departs starting from 9.00 and it can make several rounds to deliver all travelers to the starting place, and in the evening it brings people back also 'in lots'. When we were there, there were many travelers so that day the driver had to do 2 or 3 rounds. It was an old but well taken care of UAZ. My boys loved it and now, seeing a similar car, they say they wish to make a ride.
The road to the waterfalls is about 9 km, and it's not so bad as the road to Multa lakes. There were stones, and corrugations, and holes, and we had to cross a river a couple of times, bu in general it was OK and it lasted only about 45 minutes. The driver said we were lucky to come when the weather was nice and dry.
The off-roads bring people to a small site with a fireplace and from there on one has to hike about 1.7 km to the first waterfall, then about 500 m to the second and somewhat 1-2 km to the third, which is said to be 72 m high. I didn't have a chance to check it, because the third waterfall appeared to be difficult to reach for my small son. But anyway, the hike was wonderful!
A short but wild river Shinok begins in a swampy plateau, but flows mostly in a deep and dark canyon. To reach the waterfalls tourists have to cross the river several times. We were there on a warm and sunny day in August, when the water was shallow, and we didn't even bother to take off the shoes, but  those visiting the place in May, June and even July say that one may need rubber boots. Besides, it is advisable to visit the place in August, because in spring and in early summer the area is full of ticks. Fortunately we didn't see any of them.
Sometimes the canyon resembles rain forests, though I've never been to a rain forest and don't know what they look like. 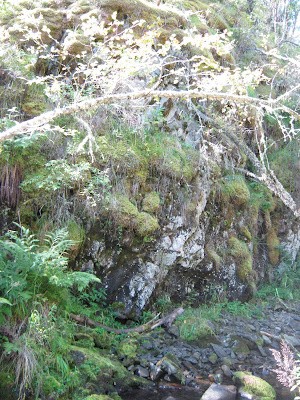 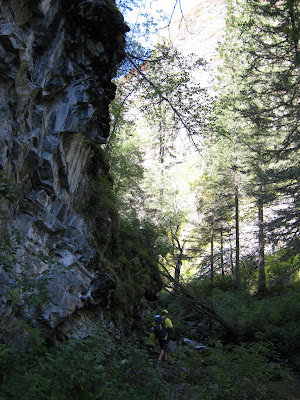 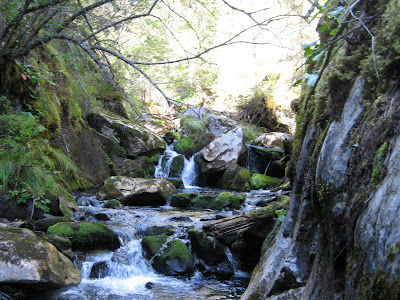 The first waterfall is a small one, but spectacular and it is possible to swim in a shallow pool. 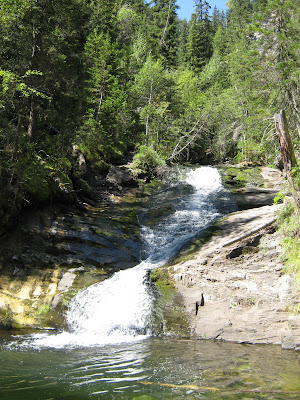 Between the first and the second waterfalls I've seen one more, which is not considered to be a waterfall, but I think it can be! 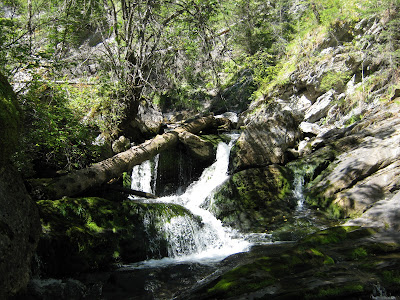 The second waterfall is spectacular! 30 m high surrounded by stones. Really worth the hike! 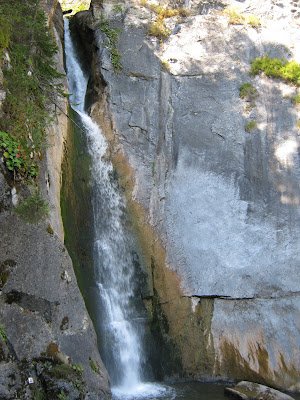 I couldn't wait to see the third, which is 72 m high, but it turned out that the path is practically impossible to do for a small child, as one has to climb the steep angle holding on to a rope! 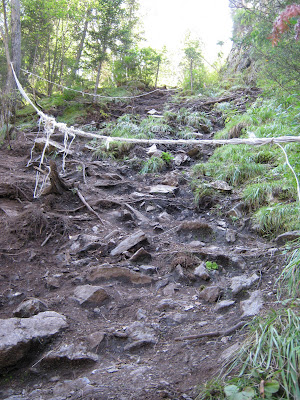 Then the same back. 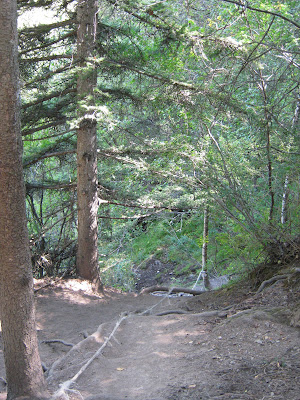 When we climbed up (the younger son sitting on the father's back), it turned out that we have to climb down, then climb up again. My husband was tired, my small son was not very happy and we knew that after seeing the waterfalls we had to go back to the place where we would be picked up by the car. So we decided to split and my husband went to look at the third waterfall alone. And he didn't take the camera with him:(

Well, I thought it was just a sing telling me I have to go there once more some day.
there is an article about the waterfall on Wiki, but in Russian only (http://ru.wikipedia.org/wiki/Каскад_водопадов_на_реке_Шинок)
I've found a couple of other articles, also in Russian: http://www.turistka.ru/altai/info.php?ob=487
http://galt-auto.ru/publ/199-1-0-219

Happy reading and come to Altai!