I've been silent for so many days and even week. A lot of work, a typical situation for the end of a year.
And today I've managed to finish the last project I had to translate, to cope with the necessary bookkeeping and even to clean the house.
It's quite cold outside, which is typical for the middle of winter.
Real Siberian Christmas and New Year frosts...
I'm looking forward to New Year's Eve and thinking about summer.
It's quite a long time to wait, and too early to make plans, so I'd rather remember the last summer.
It was really great, with our travel to Altai Mountains. It is something like a tradition for our family already.
It was the second time we went to Altai with our kids.
And for me it was somewhat the 10th travel there.
The first time I visited Altai was when I was 16. My cousin, who was 26 at that time, took me with her. She was with her boyfriend and paid almost no attention to me, so I had a lot of time and opportunities to walk around, to look and listen and to fall in love with that wonderful region so deeply that all my numerous travels to Europe, which I also love, cannot replace that passion for Altai.

The region is wonderful. Its beauty and magic attract people from the whole Russia and from abroad. And it is very favorable for the region and its people. That mountain country was deep in crisis during the whole perestroika period and now visitors and locals say it's booming. Well, not the whole region, just a part of it, which is relatively close to the cities of Novosibirsk and Barnaul. It can be accessed by car and bus only, as trains can only ring you to the city of Biysk, which is about 100 km away from Gorno-Altaisk, the capital of Altai Republic.

If you would like to know more about that pearl of Siberia, there is a lot of information in the Internet, like http://en.wikipedia.org/wiki/Altai_Mountains
http://www.waytorussia.net/Altay/

Or just contact me, and I will be happy to tell you everything I know about Altai.

This time our travel lasted 11 days. We started it August 13, early in the morning. We knew we needed about 8 hours to get to Altai. It's about 450 km distance, but with two children in the car it always lasts longer.
We made a stop in Bisyk to have coffee and lunch. I wrote a little about that town in one of my previous posts.
The town is really pretty and prices there are much lower than in Novosibirsk. Don't miss a chance to look at it, if you happen to go to Altai.

Somewhat at 4 pm we were in the mountains. It was Chemal district, which was our destination that day.
Wonderful weather, about 30 C. Clean air, the Sun! After a busy and smogged Novosibirsk it was like in a paradise! 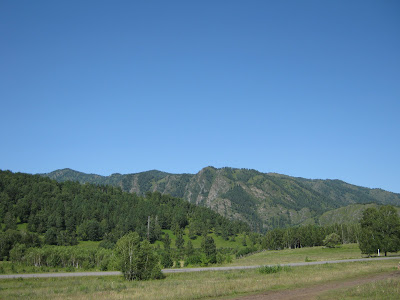 The next day was as wonderful and relaxing as the previous one. We were exploring the places we didn't visit before, lying in the Sun, even bating in the Katun river. As in all mountain rivers, it's just about 12 C in the summer. 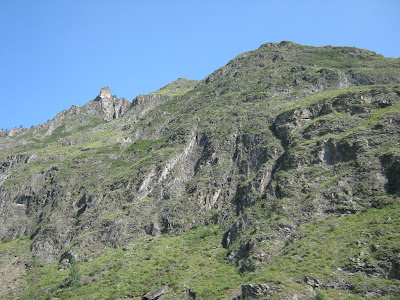 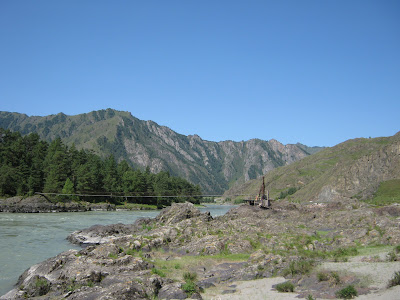 There are not many solid car bridges over Katun, but you may often see and experience such small hanging bridges. Often you should pay to use them, but in remote places they are still free.
We should pay 30 rubles per person to use this one) 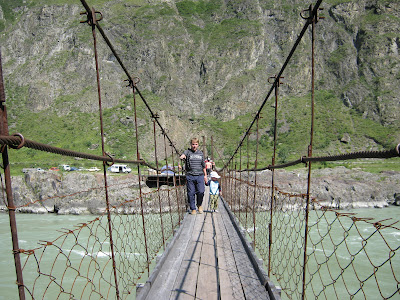 The next day we started our way along Chuisky Tract or Chuya Road, an old road used by the Chinese and Russian merchants during the old times. The road is still important for commerce and logistics as it directly connects Russia with Mongolia, but it's used by more and more tourists, heading for remote Altai districts, glaciers and Belukha, the highest peak in Altai.
We saw a group of car tourists from England! 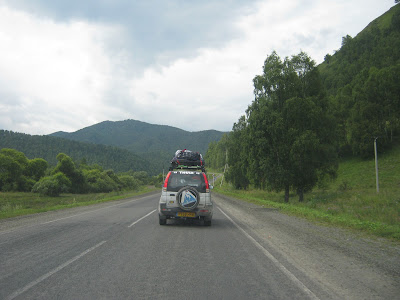 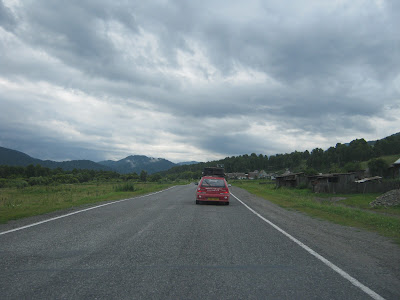 And in a couple of hours we were at Seminsky pass, 1700 m over the sea level, the highest point at Chuisky Tract. It's usually very windy there, and snow in the middle of the summer is not a rare event.
In winter the place is a ski resort. Not especially popular, as it's so far from all cities and only accessible by car and bus. 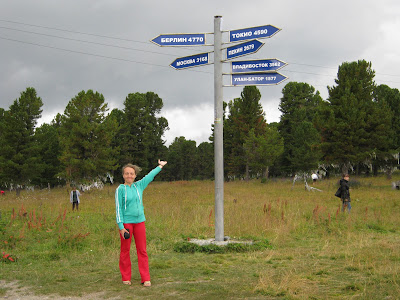 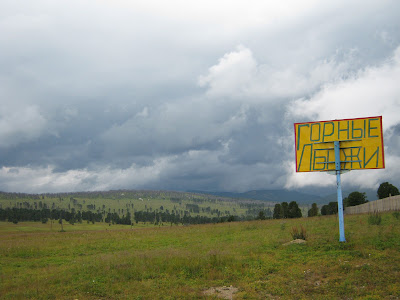