The 14th of January is the strangest Russian Holiday, and the most difficult to explain to foreigners, but I'll try, and first of all I would like to wish all of you happy Old New Year!
The tradition dates back to 1918 when the young Soviet Russia officially adopted the Gregorian calendar, but the Russian Orthodox Church continued to use the Julian calendar. The New Year became a holiday which is celebrated by both calendars. At the same time Christianity was banned in Soviet Russia, but people here are tough, and they went on following Christian traditions, including New Year celebrations.
The Old New Year is an informal holiday. No one gets a day-off, but people keep congratulating each other, even giving present, cooking large meals, using fireworks, and arranging parties. The tradition of celebrating the coming of the New Year twice is widely enjoyed: January 1 (New New Year) and January 14 (Old New Year).
And it is normally on the 14th of January, when all Christmas and New Year decorations, illumination and Christmas trees are put away, though the ice and snow figures remain until they melt away in spring.

So tonight there will be celebrations, and it's big luck that it's Friday. As for me, I'm going to cook something delicious, though I understand, of course, that one celebration of New Year is more than enough.
Here's what Wiki says about Old New Year: http://en.wikipedia.org/wiki/Old_New_Year (in English)
http://ru.wikipedia.org/wiki/Старый_Новый_год (in Russian)


But anyway, today is just the perfect day for celebration of anything you can think of, because Nature made a wonderful gift to Novosibirsk. Today we woke up to find the city looking enchanted. In the night we had precipitation called drizzle, and all the trees, electric lines, benches and cars were are are still covered in white.
I just could not miss that, and, having brought the kids to the kindergarten, went to the park in the city center to take photos. I had two goals, actually, and I'll write another post about the second one, but as this post is about  Old New Year, I would like to make a present for my readers and fans and here it is: 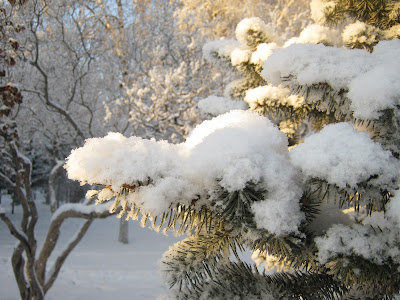 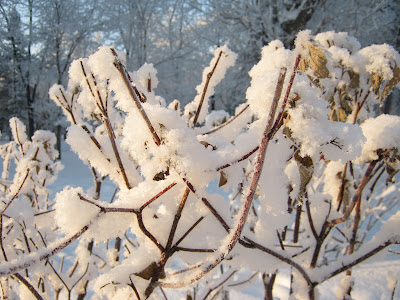 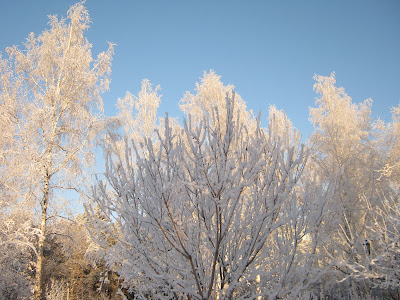 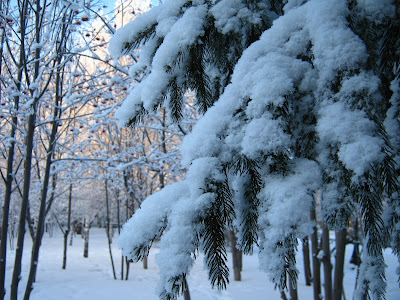 On a day like this I always wish I had another camera, a professional one, because I felt like taking photos of every tree and every bush. And I was not alone. I saw at least 20 people with cameras, amateur and professional, taking pictures of trees covered in mysterious white blanket. I think all these people are now uploading these pictures to numerous social networks or otherwise sharing them with their friends and relatives who live far away and cannot enjoy the sight.
Happy watching and Happy Old New Year!
Автор: Olga Tkachenko на 13:10

Email ThisBlogThis!Share to TwitterShare to FacebookShare to Pinterest
Ярлыки: Novosibirsk